When Guardian journalist Bev Fearis and her family came to Puy St Vincent for the first time, they weren’t expecting much in the way of après ski, but were pleasantly surprised…

Like any self-respecting journalist (and mum), before I came to Puy St Vincent I’d done my homework. I’d read the reviews, articles, and guides, checked out the facts and figures, and asked around among my skiing friends and colleagues. I quickly established that Puy was a firm favourite for families, great value and perfect for our 5-year-old’s first ski holiday. But I also ascertained that it was a bit lacking in the après ski department.

For that reason, I almost told Wendy and Sarah at Snowbizz not to bother booking our son, Freddie, (5) into the evening Kiddie Club. There didn’t seem any point if there was nothing for us to do in the evenings anyway. Instead, we decided we’d all have early nights and wake up early and make most of the fantastic skiing. Luckily, however, the Snowbizz team booked him a place anyway, and I’m so glad they did. Once Freddie had heard from the other kids about the pizza party, the pirate treasure hunt and the talent show, there was no way we could keep him away, and although Puy doesn’t have all-night bars and wild nightclubs (which we wouldn’t have wanted anyway), it turned out there was plenty to do for us grown ups to do in the evenings. With the help of Michel from Snowbizz, who knows everyone you need to know in resort, we found ourselves with a full après ski programme, and we were still in bed by 10pm! Here’s what we did:

A totally exhilarating experience that even non-skiers can try, the snake gliss is essentially a train of toboggans where you bomb down an empty ski run (after the skiers have gone) at the mercy of an expert driver. The further back you sit in the train, the more of a thrill you get. We were sensible and sat near the front, but it was still totally thrilling. Our driver, Sebastian, took us hurling down, making us think we were going to go over the edge of the run and then turning at the last minute. It was brilliant, and only €10 per person. Afterwards, we popped for a beer at Le Pub, the cosy little bar on the bottom floor of the Sun Vallée apartments. 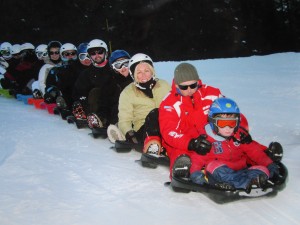 This is the restaurant that Snowbizz customers go to if they opt for half-board, and is definitely the best in resort. It’s a typical wooden chalet-style restaurant, with a lovely log fire. It’s got all the mountain favourites, like cheese fondue and raclette. We treated ourselves to the meat fondue (€22 a head for two sharing), which to be honest, could have fed 6 people. Freddie, meanwhile, opted for a ham and cheese wood-fired pizza and, despite loving it, couldn’t finish his either. The waitress put it in the box and we had it for lunch the next day. Glowing from the fire and the wine, we rolled back down the hill to our Sun Vallée Apartment and into bed.

I’d always wanted to try cross-country skiing but all the guides were otherwise engaged as ski guides, so instead Michel suggesetd we tried a spot of snowshoeing. He’d come across a guide, Cyril, who was taking small groups on moonlit tours and it sounded perfect. We joined a group of 8 (all French) and Cyril (about 6ft5 and not an ounce of fat on him) drove us up to Puy 1800 where we were kitted out with our snowshoes. Then we crunched our way into the larch forests, following the narrow track that presumably, Cyril’s last group had made. We climbed higher up the mountain and as the snow got deeper, the dusk set in. Cyril stopped to kit out some of the group with torchlights and headlamps and we continued higher and depper into the forest. Then it was time for our descent, which was a mixture of more careful crunching or sliding through the deep powdery snow. A few people tumbled over, laughing, but the snow was so soft it didn’t matter. We found a little clearing on the edge with views over the resort, by now just tiny yellow lights in the distance, and Cyril built a fire. We all gathered wood to keep it going and then sat and ate delicious bread and local cheese, cold meats and a génépi pate, with a cup of mulled wine. We looked up at the starry night sky with Cyril talked about the local wildlife and plants. It was magical.

It was time to take a dip in Puy’s outdoor pool, heated to 28C. Warren had his speedos at the ready (sorry, gents, it’s the law in France!!), and we all set off with our towels to the pool, right next to the tourist office. The pool starts inside, giving you time to acclimatize before heading out into the open air, steam coming off the top of the water, snowy mountains in the distance. Freddie loved it, and so did we once we’d done a few lengths. Later that night we joined the crowd to watch the torchlight processions, a Puy tradition in the school holidays. It was lovely to watch some of the children Freddie had made friends with at the Snowbizz ski school winding their way down the mountain with their colourful torches. Hopefully he might be good enough to join in next year. There was free mulled wine and hot chocolate for spectators too.

Up there on our wishlist for our ski holiday was a skidoo ride and we’d saved it till last. We met our leather-clad instructor who kitted us out with helmets and talked through some of the safety rules. He gave the drivers a quick lesson then told us passengers how to lean into the mountain as we crossed the steep ski runs, to stop the skidoos from toppling over. Butterflies in stomach, helmets on, lights on, ignition and we were off, slow at first and then building up speed keeping pace with our leader. We wound our way up the mountain, passing the mountain-side restaurants now all shut up for the night, then wound our way back down again, watching the skidoo in front to know when to lean left and right. Then as our instructor had told us, we did the same loop up the mountain again but faster this time, through a light blizzard which made it seem even more like being in a Bond film. We were still buzzing when we nipped to Le Pub for a quick beer before picking up Freddie from the final Kiddie Club party – the Friday night disco. He didn’t want to leave, and neither did we! 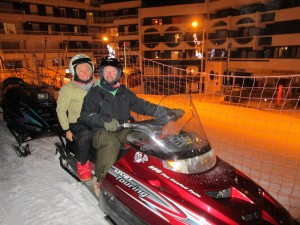